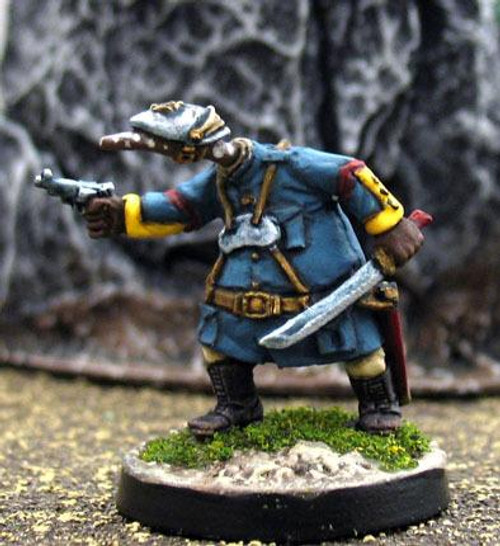 Geuff Vargnarh was a Yawdryl of the daring 904th Freywilgh Catrawd on an extended, unauthorized patrol into Maer Braech when his section was sighted by a Crusader cavalry patrol. Unfortunately for the Coftyrans, they were in open prairie, almost a kilometer from the nearest natural cover. The Crusader cavalry patrol charged at the infantry, and at that moment the Coftyran is-Caerten lost his nerve and fled. Knowing that only cohesion would keep his soldiers alive, Geuff formed them into a firing line, using his rifle butt to punctuate his orders. The infantry kept their heads, and delivered two solid volleys at the charging cavalry, breaking the charge and driving them back.

Then, with iron determination, threats, and force of will Geuff marched his soldiers that kilometer to cover, pausing three times to volley fire and drive off the cavalry again. The cavalry patrol was decimated, but returned in force that afternoon. This time, using the cover of woods and a ravine, the patrol managed to fend off attacks from a full company of Crusader cavalry, using their rifles’ superior range and Yawdryl Geuff’s exceptional tactical sense. When Yawdryl Geuff’s section was finally rescued, they had cost the Crusaders nearly their number in cadier and riders. The only casualty of the platoon was the panicked is-Caerten, found dead with a lance-wound in his back.

Yawdryl Geuff was promoted to is-Caerten for his valor, and his is-Caerten’s sword was made from a cut-down Crusader cavalry sabre. The grizzled is-Caerten is greatly respected by both armies, and his nickname as “Old Cadier-killer” is known all along the shadow of the Last Wall.