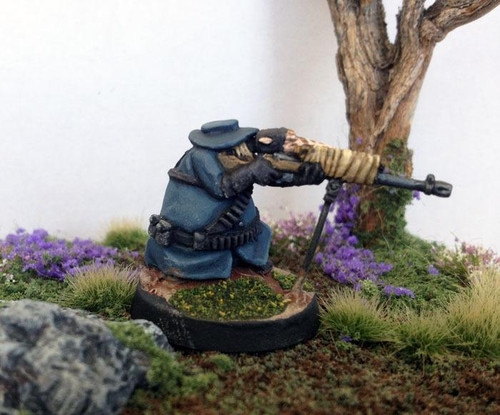 Snipers have been a staple on the battlefields of Alwyd since the perfection of precision firearms. Though some would say their use violates the Law of War, stripping the victim of his ability to fight back, this philosophical quibble has done little to stem their use by those commanders fortunate enough to have access to one.

While the snipers employed by the Crusade tend to use specialized weapons, specifically the high-powered anti-materiel Afir TK3 rifle, those who fight for the Crymuster have little more than their standard-issue rifle and a scope. It is a widespread joke among Crusaders that the only way a Coftyran sniper gets to be any good is by robbing the bodies of his victims to pay for a sightglass. It would be a fool indeed who dared repeat that in the presence of a Crymuster sharpshooter, however.

It is true that there is no formalized training process for Coftyrans to become snipers. Likewise, there is no room in the budget of most catrawds to finance an independent element, nor the mindset to allow such an operation. While Crymuster officers are more than glad to utilize a sniper’s talents, their insolence and their very independence is distasteful at best to the sensibilities of most Coftyran officers. Even so, a sniper who strolls into camp, filthy from days or weeks in the field, will have no problem finding whatever food or replacement equipment he needs from rank and file rhyflers. The legend of the Coftyran sniper is a long one, steeped in blood. They first cut their teeth fighting in Craesil, Maer Braech, and Toulmore during the earliest days of the Crusade. They fought for the First Families of those nations, but answered to no one. Exact numbers of those first sharpshooters are unknown, a part of the tradition that has continued to this day. The extent of their organization, the numbers involved, no quar on Alwyd can say with any certainty.

Just as the sniper draws on a catrawd for supplies, he also uses them for taking new trainees. After resupplying himself, if he is currently without an apprentice, he will approach the unit commander. In exchange for local knowledge or his services, the sniper will survey the catrawd and draw the rhyfler of his choice as his tyro. He must choose well, for a slow or recalcitrant student could quite easily get them both killed. The training period varies from novice to novice, but generally requires at least a few months of unlearning everything the Crymuster had taught him to date, and relearning the art of killing from cover and over great distances. If the apprentice survives, he will leave his master and go out on his own, eventually taking a student of his own.