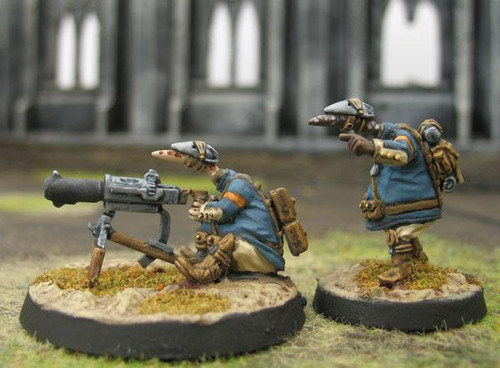 Milwer Maehyn joined the Crymuster to kill Crusaders. Rarely speaking of his clan or life before the Crymuster, he has consistently placed himself in the thick of combat, fighting Crusaders with passionless precision. He has no time for the small acts of battlefield friendship, nor in recognizing the quarhood of the opposition. His commanding officers consistently praised his efficacy, even as his fellow soldiers began to shy away from the grim, unsociable milwer.

He has since been assigned to the infantry support weapons, and the brutal, close-quarter nature of combat with the HSG seems to suit him. His detachment of gunners have come to resemble their taciturn commander over time, and now all are nearly as feared by their fellows in the Crymuster as they are by the Crusaders.

The Crymuster’s choice for Heavy Support Gun is the venerable Canister, Heavy, Pattern 1699, a multi-barrel affair whose distinctive basso ‘burp’ led soldiers to nickname it after the Coftryan fire toad, or uflaen. Mechanically robust, but heavy and somewhat old-fashioned, the crisis along the Last Wall caused the Crymuster Armory to refurbish guns that had been relegated to museum pieces and patriotic displays as every last available weapon was needed on the front lines.

A running joke among gunners assigned to the Uflaen is to claim to recognize every Uflaen as the one that stood outside the Motte of one’s hometown, based on the distinctive bend of one barrel which resemble’s one’s uncle’s snout. It is not a very funny joke, but the repetition of it still drives many gunners into fits of sniggering.

Soldier 1: “Say, that’s the very Uflaen that was on the monument outside the Motte back home!”

Soldier 1: “That bend in the barrel. It looks just like my uncle’s snout.”