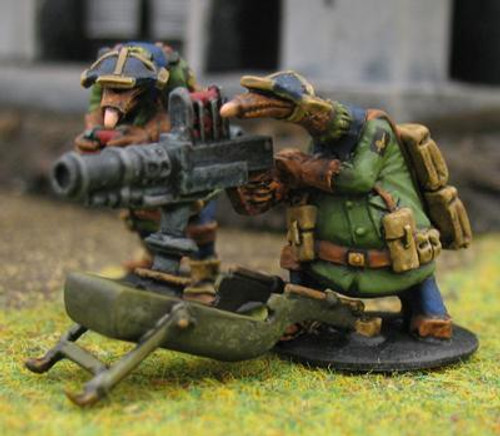 The 50mm Model 6 was developed as a quar-portable heavy weapon that could accompany light infantry when field artillery was unavailable. It is a versatile and dangerous weapon firing a canister round filled with flechettes or ball and capable of throwing a heavy (5lb) solid projectile. A heavy fragmentation round is also available.

The weapon is served by a squad under the command of a Yawdryl or senior Milwer. In combat, it is fired by a single Quar and served by two loader-assistants. The remainder of the squad will either be hard at work preparing the stripper clips for reload or will have weapon in hand, ready to defend if the enemy gets too close.

The weapon’s mount can also be used as a sled for transport. Four quar can use a special harness to haul the Model 6, though for long marches the preference is to break down the weapon into pack-loads across the whole squad. The gunners are also known to impress pack animals or carts at the first opportunity, leading to a large number of off-book animals in these weapon companies.

The heavy slug round is often used to destroy emplacements in the trenchline, and has proven its utility as a tank-buster. Though the slugs are relatively slow, they do pack enough kinetic potential to cause armor plates to buckle and welded joints to fail. But its original and most notorious use is as a close defense weapon, and for this the infantry have dubbed it the Black Joke.

An infantryman charging across no-quar’s land might survive the machinegun fire, artillery, and wire. He can advance within Bogen-range of the enemy line, have the faintest glimmer of hope of surviving the charge, only to have this gun open fire with canister rounds. Usually these cannons have been carefully concealed until this moment, with interlocking fields of fire, catching the infantry utterly unprotected and unaware. Few quar survive in the field of fire of the Model 6.

Some Quar are drawn to the Machinegun Battalions because they have a score to settle with the enemy, and see these weapons as the most effective way to take their revenge. But others join because they understand the hardware and appreciate its potential and use on the battlefield. Yawdryl Bynsyk falls into that latter category.

Ever since he carried the spare barrel and ammo for his squad’s light machinegun, Bynsyk has been fascinated by the machinegun. He has a strong sense of how these weapons can best be deployed to control the land, and mechanical skills to keep his weapon in good working order. He is also a good shot, able to do in ten clips what would take another quar fifteen. His squadmates appreciate his ability, and when the going gets tough, there is no-one other than Bynsyk they want to see behind the trigger.