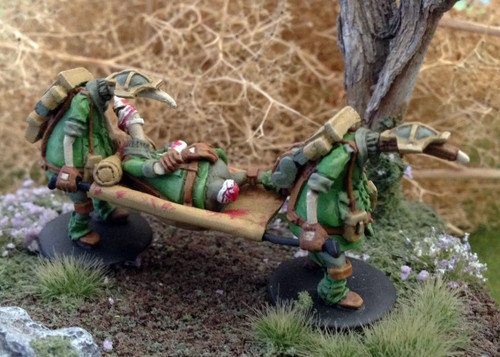 Fifty steps. That is the average life expectancy of a trench-bound rhyfler once he clears the top lip. Fifty steps. Coming or going, it makes no difference.

Most quar that try their odds against that grim statistic are compelled by orders, or their honor, or the companionship and high opinion of their brothers around them, and have the dubious comfort of making their attempt with a weapon in their hands.

Not so the quar of the medical catrawds, those brave and daring lads who carry no rifle, send no shrapnel downrange to kill or maim. Their professed intent is to see as many of their comrades home to wife and kit as they can manage, at the risk of their own life. The Law of War has long held their anointed task on a par with the acolytes of the Special Union, but in the thick of battle those distinctions can be lost. A fifty-pound bomb or explosive shell cannot tell a lawful combatant from a stretcher bearer, or a rhyfler from a faedyg. Rumors have even circulated among the front lines of unscrupulous snipers and daefyls specifically targeting these self-sacrificing kits, to their disgrace and the continued besmirching of the Royalist’s collective honor.