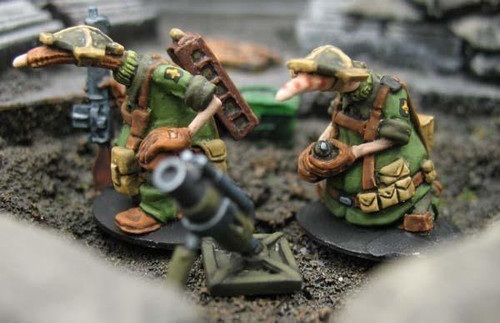 These two young Quar are good examples of the kind of soldier who
flocked to Alykinder’s banner during the Crusade. Both young quar were
bright, politically minded, and eager to create a better life in the
world that would follow the Crusade. Both Quar were promoted to the
23eme after valorous service as line infantryquar, and then assigned to
one of the newly formed weapons companies of each regiment.

Aside from their loyalty to Alykinder, neither Quar could agree on a
single point of politics. Their comrades in the regiment quickly
referred to their foxhole as “the Assembly Floor” for the many and
heated debates the two had over every conceivable political topic,
ranging from the structure of the parliament to the matter of
subsidies for krill farmers on the Goseth Ocean.

They are shown here with a 5cm Mark 2 Infantry Mortar. Rhyfler Yul is
shown here keeping a watch for direction from the mortar coordinators,
while Rhyfler Bifron is loading a new shell. They have just hastily
set up the mortar, as Yul has not removed his ammo pack, and there is
no foxhole dug. No doubt as soon as there is a pause in the
bombardment, the two will dig a new Assembly Floor, and once again
return to their war of words.