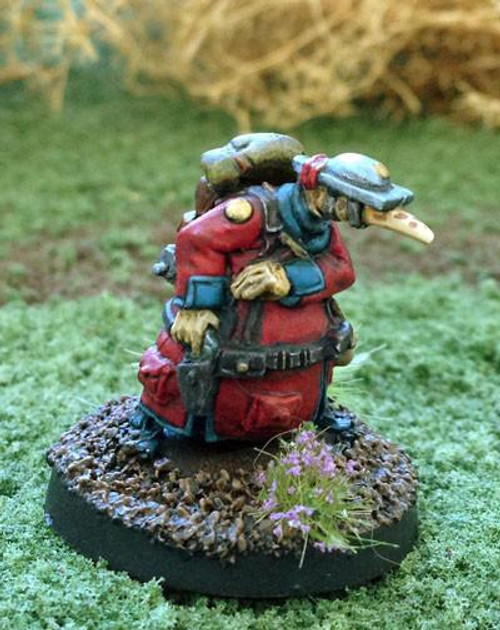 Crown-milwer Th’m tipped the kettle back one more time, but to no avail. The last drop of tea was gone and the rare leaf was nowhere to be found, not in any cupboard along the entire front. His Lordship grumbled as he rocked back and forth in the command bunker, his weathered chair creaking upon the duckboards. Six months on the line had frayed his nerves badly, and the tea and a good pipe were the only things that calmed him anymore. Now both were gone, as the last of the nightshade had been charred the afternoon prior.

His Lordship Sylwedl Matteu Nyg’l R’gynld "the Third" Buxley, of Buxley House on the great knoll west of Morrys, stepped out of the bunker. He tapped his foot, scratched his snout and angrily shook his empty pipe at the sky. "Now that's pinched it!" he exclaimed in a roar, "What more could go wrong today?" And with that, the crackling of field guns in the distance began. Large ground bursts seconds later dug into no-quar’s-land and mounds of earth flew over the top of the trench. Clods of smoking turf rained down on the gaefyn of the Fraedarl.

"Bloody..." was all Matteu was able to exclaim before his aide pulled him aside.

Whistles blew in the distance and the clacking of the "Em-tens" began.

The crown-milwer clinched Lord Buxley’s leather belt and holster as Matteu checked the clip in his pistol. Two hundred years that weapon had been in the service of the Fraedarl, repaired and rebuilt a half-dozen times, yet still true after so long, even if finding fresh ammunition was becoming almost as difficult as stocking up on tea and tobacco. He leveled his right hand at snout level and watched as it shook. "Nerves," he mumbled with a soft curse. Not for the first time in the last six hellish months, he wished he could be as strong as his Grandfather’s pistol. Even so, he bounded back out into the trench after Th’m was through sorting him out, digging his own whistle from inside his tunic.

Crusaders fell in droves all along their advance only to be replaced by others as wave after wave exited the far trenches. Within minutes, singletons and groups of Crusaders were jumping into the trench, and the hand-to-hand fighting started. Matteu looked up as a quar tried to leap atop him, but he let the ruffian have it with his sidearm. The Crusader slumped over and rolled bonelessly into the trench. After he settled down in a heap, the stem of a pipe was pushing out of his breast pocket. Lord Buxley looked over at Th’m and chortled. "There's the stuff, ol' bean! Pat him down for more pipeweed! Today’s turning out better than expected!”

For their brave action, Lord Buxley and his company would receive special service medals for holding the line, there was no doubting that. But more importantly, his Lordship acquired some of the very finest Tokish tobacco, and survived the day to boot. Musing on this while drawing a pull from his pipe, the Sylwedl smiled and continued to care for his pistol - polishing and oiling the antique with much care.