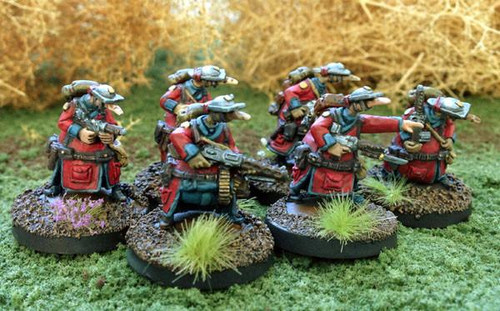 (Contains NCO and LMG Gunner unique to Squad A)

Jetti's boys stood at attention. He marveled over the long line of fops and dandies beside him. They were certainly more than that, but today they were on parade, and pomp was the order of the day. Buttons were polished, dress shoes buffed so each quar stood reflected in perfect detail, right down to their Sprygyts held tight in place by bleached white gloves. It was a daunting contrast to their usual state, all grime and sweat, a condition they’d still been in only hours before. Now, at the majordomo’s signal, Yawdryl Jetti called out and the line of troops presented their weapons, bayonets glinting in the sunlight. His Majesty drew forward and the ceremony began.

A week earlier the squad had seen fierce fighting outside Blith, the so-called back door of the By-Setin Front. Jetti and his quar were part of the 333 Catrawd "The Great Galt's Gift", a unit whose greatest source of pride was turning more young Fidwoggers into battle-hardened warriors than any other unit in the realm. The storm they waded through that day had been nothing short of miraculous; even more so as not one of the gaefyn in his squad had been lost, and of the entire 333rd only twelve had perished. The ancestors had no doubt recognized the collective sacrifice of the catrawd and rewarded its valor.

The yawdryl and his lads had harried the flank of a mixed force, Dar Riilian infantry covering Barroese light tractors. They had caused so much chaos and confusion that the Dar Riilians quickly broke and fled the battlefield, exposing the unsupported tractors. This made way for the 47th, a gwylon wedge, Jetti’s own support. With the infantry routed, the cavalry was able to dispatch many of the tractors before sending the rest into a full retreat, leaving only the quar of the ‘Three G’ on the field of victory.

Jetti smiled as he reflected on the past week before refocusing on the ceremony at hand. His Highness Edifys Fedderic stopped before him and smiled back. "Is there something you wish to share with me, young Yawdryl?" the king asked. Jetti snapped back to attention and then looked squarely at the patriarch of Fidwog's First Family and replied in short with a simple "No, your Majesty." A badge of new rank and a fistful of medals were pinned to his chest by the king, who stepped back and presented a crisp salute to the newly minted Crown-myn-Yawdryl. Jetti raised his snout and presented his Sprygyt in a return salute.

He smiled once more, this time with the king. This war was a curious thing, and circumstances were always changing.