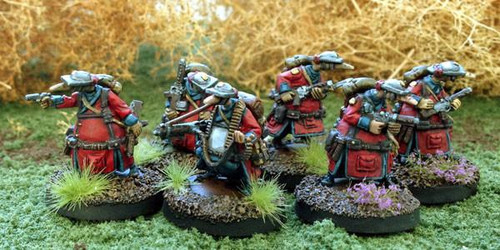 (Contains NCO and LMG Gunner unique to Squad B.)

Written more than a century ago by Syrnol Gustoy, the Fraedarl Twr Ysbridd instructs a gaefyn on how he is to conduct himself in the service of His Majesty. This manual has surely stood the test of time, as it has recently enjoyed its eightieth printing. If such an influential and esteemed document can possibly be boiled down to a few passages, the Twr may perhaps be best portrayed by these few quotes:

"One must be kin to his Squad and to his fellow Gaefyn; in the Foxhole, in the Trench, on the Long March, and in Garrison."

"One must have the capacity to endure the many Hardships placed upon him."

"Unit cohesion must, at all times, be the utmost of Value; Obedience, Discipline, and ultimately the Completion of Duty in proper Military fashion will garner the respect of your peers and that of the Catrawd, the Officer Corps, and that of His Majesty."

"Whilst in Garrison, one must Never have the Wool of his Smock unbrushed, a Leg of his Pants unbloused, a Button undone, a Shoe unshined, nor a Belt notched too loose, as this would be unbecoming of one in the Fraedarl."

The manual in its entirety is deeply moving and has been the basis for Paf Braed to this day.