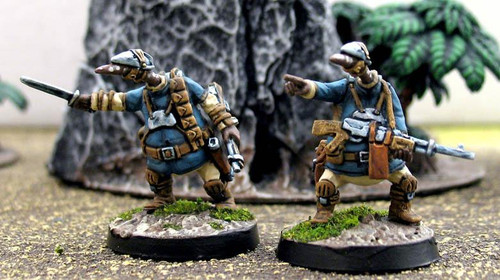 An informal tradition of the Crymuster is for squads to have a commemorative photograph taken prior to being sent to the front. These soldiers from Company E, 904th Freywilgh Catrawd, must have commissioned this photograph after completing a garrison deployment sometime prior to the Battle of Gate 18. A caption accompanying this photograph identifies the Yawdryl as Padryg Rutcovskih, who Crymuster records indicate as having enlisted in 1764 and promoted to Milwer in 1766. This squad would have been his first command as Yawdryl.

Resplendent in their inspection-order gear and bursting with the audacity of the 904th, the martial valor of this squad would be proven in the Battle of Gate 18. Their Model 65 uniform tunics are clean and pressed, and their weapons show hallmarks of the care and lavished attention of the Coftyran arsenal.