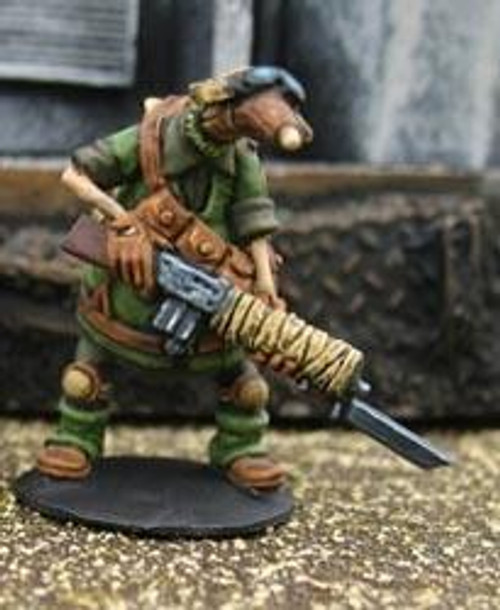 *Yawdryl Costall Pren* was born the son of a coxswain in Port Faurland, on the Bay of Shralm. The Pren family held a long, proud tradition of naval service—a piece of the keel of the Gurteen above the hearth was an ever-present reminder to friends and family alike of this legacy. Despite this family connection to the sea, he broke tradition by enlisting in the 456th Marrobourn Light Infantry Regiment instead of the Navy. He became a talented foot soldier, and demonstrated an affinity for drink and brawling that would make any Pren sailor proud.


Yawdryl Pren holds the unique distinction of being the only soldier ever to serve in the 456th with the rank of Regimental Master-Yawdryl—for exactly one day.


During the Second Battle of Two Rocks on the plains of southern Creevin, Pren commanded the 3rd Squad, 8th Company, of the 456th Marrobourns. Though the front had seen virtually no activity during the frigid winter months other than occasional artillery duels, the 456th continued to send out patrols. On the night of 11 Waess, 1751 Qa., Pren and his 3rd Squad set up an ambush in the woods near the old Scorch Mill. After constructing a barricade on a road leading deep into the woods, Pren and his Quar deployed on either side of it for the night. Around midnight, to an enemy Colonel Kilglas Skren’s misfortune, he and his staff officer drove straight into Pren’s ambush. After removing the staff officer’s body, Pren and his team made a thorough search of the vehicle. The bloodied Colonel and his possessions were then carried back to 8th Company’s commanders and turned over.


As it turned out, Colonel Skren had been attempting to make contact with a recently established forward observational unit that was having trouble with downed communication lines. The colonel had decided that things had been quiet enough on the front for him to make contact personally to instruct the unit on an upcoming offensive. In addition to this information, Pren and his team had found maps and tables of operation showing in detail the disposition of units under Skren’s command. Though the Colonel’s regiment did not constitute the entire enemy force at Two Rocks, it did represent the attacking units in the upcoming enemy offensive. For his actions Yawdryl Pren was awarded the Umber Crest and promoted to Regimental Master-Yawdryl. He and his squad were given a week furlough to the rear for rest and relaxation.


Having turned over all of the Colonel’s possessions with the minor exception of a case of fine port, Pren, his mates, and the Colonel’s port celebrated his first day as Regimental Master-Yawdryl. All was fine until, in the early morning hours, Regimental Master-Yawdryl Pren shot the company’s mascot, Old Blue Tail. Yawdryl Pren now happily commands his 3rd Squad, 8th Company, 456th Morrobourns without his short-lived promotion, and Old Blue Tail has but a slight limp.