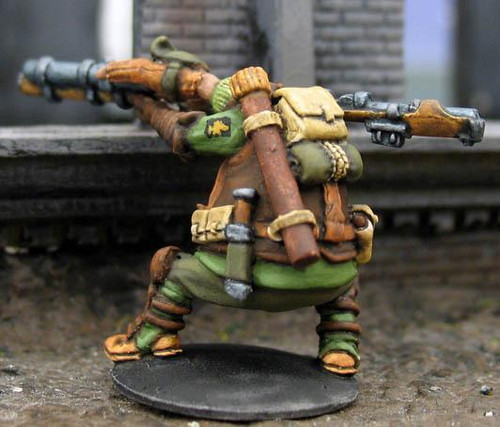 Born to a clan of traditional mountain
rangers in the Svarld Range, Vilmekh volunteered with the 103rd
Catrawd on his 18th birthday. His instructors cited his marksmanship
even at basic training, and Vilmekh was his squad’s Ryshi gunner by
virtue of his superior ability with the weapon. Vilmekh set the
distance record for confirmed kill by taking out a machinegun nest at
1100 meters. He was selected for the 9th Designated Rifleman Catrawd,
and earned further distinction of being assinged to one of Alykinder’s
elite Guard regiments.

In addition to taking the lives of many senior officers, Vilmekh has
disabled or destroyed dozens of vehicles and aircraft with well-placed
shots. He always works alone, reporting into his Caerten every few
weeks before vanishing back into the front like a ghost. He holds the
dubious distinction of having been the only Crusader to rate his own
coordinated artillery barrage, and the high distinction of having
survived it.

Master Yawdryl Vilmekh carries the Afir 3Tk 15mm anti-materiel rifle.
A sniper’s uniform incorporates a number of additions, such as the
recoil pad and the rolled-up rain hood. Instead of a steel
infantry helmet, he wears a tanker’s helmet with a soft bill for glare protection.
The metal buckles and snaps of his gear have been removed so that his stealthy movement will
not be betrayed by an errant clink. His arms and trigger
hand are wrapped to keep them warm in the miserable weather on the front line
and while crawling through the mud.

The Afir Tk3 15mm Antimateriel Rifle is one of the most specialized
weapons of the infantry. The weapon is a highly modified Tokish
Foundries Tk1 antiaircraft artillery piece, removed from its pintle
mount and converted into a rifle. The ammo feed has been replaced by a
five-round magazine, and the mechanical firing mechanism with a
simple trigger and charging handle. The weapon is accurate to nearly
1500 meters because of the excellent Barroese-made Zuss Optical
telescopic sight and the clean recoil characteristics.

The Afir is not only lethal against Quar, but against material targets
as well. A well-placed shot can penetrate the engine block of an
armored car, or pass through the vision slit of a tank. Afir shots
from the ground have taken out aircraft and the engine nacelles of
low-flying airships.

The Afir is a creature of Quar mythology which descends without
warning to slay those guilty of hubris. It is said that when the
master armorers presented GHQ with the design, it was syl-Caenerol
Croux who christened this most fearful weapon.