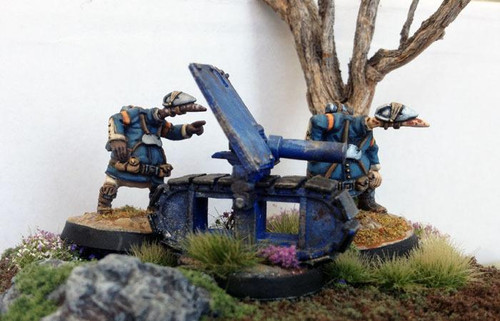 Sculpted by: Aaron Brown and HeadZombie


As the Long War has dragged on from phase to phase it has brought many innovations to the battlefield, but has seen its share of stagnations as well. Armies clung to the musket for far too long, and thousands of quar were lost to massed charges even after the widespread adoption of the machinegun. The most glaring example of the past fifty years though has to be the Royalist refusal to accept the tractor as the future of warfare on Alwyd. While Alykinder started reforming the Tokish Tractor Corps, splitting it from the dedicated artillery and renovating its designs and tactics, the First Families disdained tractors and wagons as too few and too slow to change the course of battle. Cavalry and the rhyfler would always be at the fore of any attack, and attacking was the only concern in Cryn’nt and Fy and the other royalist centers of power.
This thinking was erroneously validated after the Coftyran phase of the Liberation of Toulmore. Tractors and wagons played little part in the mountainous north of that divided nation. Crymuster rhyflers and their independent usage of small-bore field guns proved the most effective weapon against the Crusaders laying siege to Marzol and Mongore. The Royalists and their allies were able to strike at concentrations of Crusaders with accuracy and little warning, then quickly withdraw before the Tokish quar could coordinate counterbattery fire. Had the Coftyrans paid greater attention to the southern theater of that war, against Craesil on the Napolyys Plain, they would have seen the devastating effect a well-disciplined and trained wedge of tractors could have.
Instead the Crymuster ordered hundreds more field guns from the Royal Foundry, equipping as many catrawds with the light artillery pieces as they could manage. While quick-firing and accurate, and wholly deadly against enemy rhyflers, many of these guns lack sufficient power to effectively deal with the tractors that would be in the vanguard of any breach of the Great Wall.