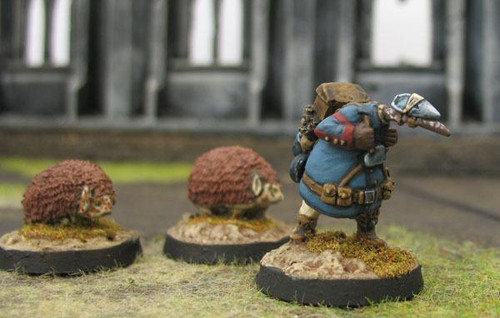 Master Victualler ‘King’ Schulaen and the Earl and Lady of Root

Few officers can make troops scramble to order faster than Master Victualler Schulaen, the head cook of the Catrawd of the Royal Sentries. Among the most senior soldiers of the Crymuster with almost four decades in uniform, Schulaen has exchanged the rifle for the ladle and become the legendary master of all that lies behind the lines. To the common soldier he is confidant and judge, factotum and sage, philosopher and keeper of the Order of Dining. To the officers, he is an unerring weather-gauge of the mood of the soldiers, and his advice is never lightly set aside.

His companions are the Earl and Lady of Root, originally property of a Syrnol’s private pantry. Schulaen noticed the Earl had a knack for locating truffles, and Lady Root easily found deep wild termite hives, and so unilaterally spared the pair their fate as a supper. When the angry Syrnol came to demand his dinner, King Schulaen delivered a stern homily on the need for everything to serve the Crymuster to its best ability.

Lady Root is expecting piglets, and the pending birth is the subject of great excitement and speculation in the dining tents of the Royal Sentries.