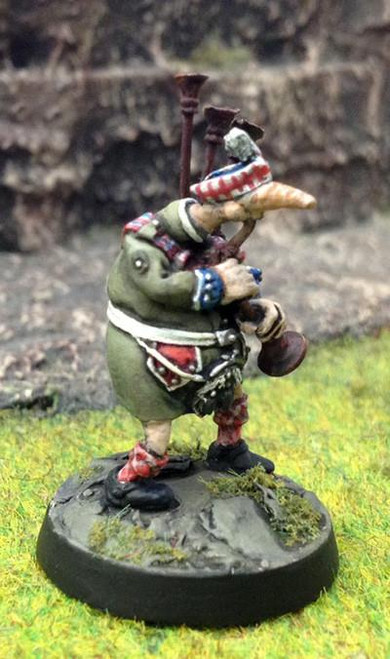 When The Last Shell Has Fallen
A Special Report by Meddwyg vu B'lla
Across this battered continent that all quar call home, there are very few consistencies from kingdom to kingdom, or nation to nation, as the Crusaders would have it. Even their widespread and sometimes forcible restructurings of the old ways have not been able to suppress one of the few features found on every battlefield, however. When the last shell has fallen, the last bullet fired, and all the tents are struck, no matter who may claim the victory, the Special Union is there.
Like so many other elements of the Long War, the origins of the Special Union of Lawful Noncombatants - the Special Union, or SU for short, have been lost amidst the gunsmoke. Certainly the role they play in finalizing the closure of battle is not new, but prior to their first appearance, these tasks were generally left to the families of the fallen quar to perform, if indeed they were performed at all. Insuring the proper care for the dead after a modern battle is no easy feat, which is perhaps part of the reason why the SU came to be. In older times, families knew where their sons had gathered to fight, and sometimes die. If their young did not return home after the last blow was struck, then the clan acolytes knew where to start looking. In these strange times of massive mobilization and worldwide warfare, it is quite simply impossible for any father to say where his kit is at any given time, or even to know if he still lives. This is the primary duty of the selfless members of the SU.
When the armies have moved on from a place, their fury temporarily spent, the acolytes of the Special Union don their long snow-white coats and hoods and scour the battlefield to recover as many of the fallen quar as is possible. Identification of the dead is not always possible, but with help from liason officers from both armies, the best effort is made to return the poor body to his stricken clan. Other members of the SU locate what scant possessions the rhyfler may have had, and see that the rightful recipient receives them. The members of the SU do their work strictly for charity, subsisting on the donations of clansquar at home and from the payments offered to them by the dead. It is the tradition of rhyflers everywhere to carry some small offering to those who would care for their bodies, should they fall. Whether that offering is in the form of coin, sewn into the lining of their helmets, or medallions hung around their wrists or neck, it is all intended for the quar who prepares his body for shipment home, and to cover the freight costs. Some soldiers even include a trinket specifically for the acolyte; dried moths are a favorite, as they keep nearly forever, so too are fried earthworms.
Their efforts, and the spirits of the recently deceased, are helped along by the low piping of that other element of the SU, the Pipers. Though originally a Fidwogger instrument, the bagpipes played by SU musicians have gained nearly universal acceptance, and their high, mournful notes can now be heard anywhere organized murder has been done. Apprentice pipers cut their teeth at local memorial services before joining their Union brethren on the long road from battle to battle, and in the case of especially notable deaths, will even play at the deceased quar's homestead, before his entire clan. This reporter has heard it said on both sides of our most recent conflict that no rhyfler will fire his weapon while a Piper plays his low songs, out of respect for the dead and the Laws set forth by great Ehn'k'du, for a piper's baleful song surely means an acolyte is at work.
There is a subset among the Pipers, though, for which retrieval and burial details are not enough. For these quar, it is not just the aftermath of combat they wish to witness, but the full intensity of a battle truly joined. Some play the drums or high-pitched fifes in lieu of bagpipes, though no matter which instrument they chose, they are still called Pipers. Fewer in number than their more somber counterparts, “Battle Pipers” can often be found right amidst the front lines, playing as they march alongside the combatants. Most rhyflers accept their presence with good humor, though few want to stand next to them, as Battle Pipers seem to attract enemy fire. Few soldiers feel any compunction against shooting anyone marching towards them, musician or no. Whatever their motivation for putting themselves directly in danger, they are seldom happier than when they are marching through the fog and smoke of an artillery barrage, their joyful notes engaged in their own battle with the gunfire to be heard among the din. Their dress is as gaudy as their song, often employing colorful kilts and bonnets or wide cummerbunds. This may explain why they are so often shot at – from a distance, they are likely the easiest thing to spot on the battlefield.
In recent years generals and politicians on both sides have expressed their concerns about the presence of the Special Union, mostly couched in language addressing the safety of its members. Some feel the SU to be little better than spies and scavengers, looting the bodies of any useful intelligence or cheap bauble, a challenge its members strongly refute. They quote the Lawgiver in his absolute decree - no matter how grievous the injury given, or how vile the cause supported by the foe, after his death his flesh has become inviolate, and shall be returned whole to his kin.