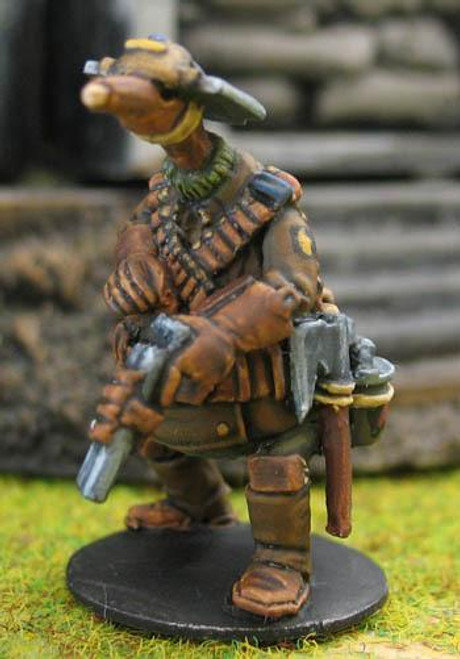 Few sons of the First Families serve in the trenches, and fewer still were supporters of Alykinder’s Crusade, but Levin mir Barro, Vidame of Chork did both. Eschewing a comfortable desk posting in the Ducal Commissariat, mir Barro instead volunteered for a Ffos-ki’s slot with the badly mauled Tokish 9th Militia Catrawd.

His men were startled to find that the debonair and cultured is-Caerten mir Barro was neither anxious to throw their lives away in a high-profile offensive, nor was he quick to claim his social status above them. Mir Barro’s writings from the front were widely published as the crusade spread. Never hesitating to describe scenes of graphic carnage, mir Barro also told the stories of the lives of the trench soldiers as individuals fighting a war whose purpose was now a daily struggle for survival. Sketches of the Southern Front sold millions of copies, and it is said that Alykinder himself kept one in his field library.

is-Caerten Levin mir Barro is depicted here as he described himself in Sketches, preparing for an assault on a Royalist trench. He is wearing a hunter’s bandoleer with ample rounds for his Grifkis Double. On his belt he has a trench raider’s tomahawk and two Type 2 “twist and throw” grenades. His one affectation of his social status is a pair of kudaskin driver’s gloves, tokens of his carefree and playboy days before the Crusade.

After his death in the Wynner Insurrection, Levin mir Barro’s remains were repatriated to Barro and entombed in the family chapel.