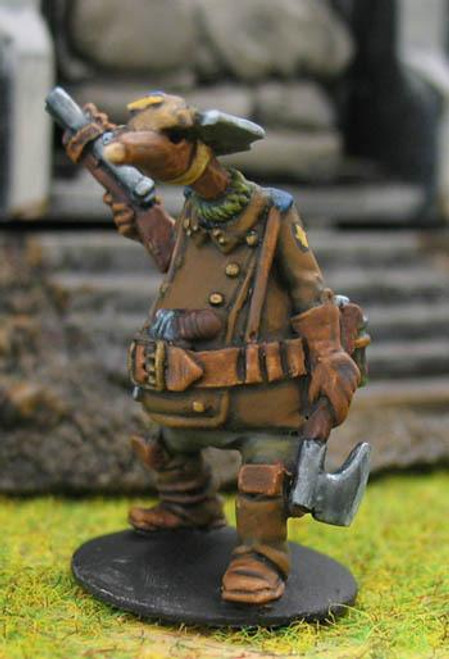 is-Caerten(Lieutenant) Galo Loeck
Loeck began his career as an ordinary Rhyfler in the 72nd Craech Line Regiment, but his dogged perseverance and abilities as a soldier led to his rapid promotion up the ranks. He was inducted into the 62nd Craech Guards after volunteering to lead a trench raid, and when the Guards were reorganized after the disastrous Battle of Two Peaks, Loeck was granted an officer’s commission in the 100th Guards.

Ever concerned with the safety and comfort of his soldiers, is-Caerten Galo Loeck is depicted as he appeared on the Battle of Actinic Heights. The Grifkis Double he carries was a gift from the Seltr clan. In his other hand he carries a trench raider’s tomahawk. In his belt he has shoved his Tokish Drylt 8mm automatic pistol, a trophy weapon which served him better than it did its previous owner.

At the time he was invalided back to Craech, Loeck had earned the Guards Badge with crossed palm, the Medal of Valor, and campaign medals for the Heights and Arnyaran Fronts.