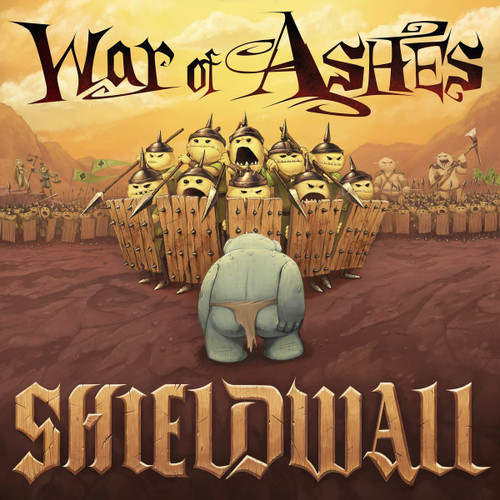 War of Ashes: Shieldwall is the latest offering from the designers of This Quar’s War and Songs of our Ancestors. Concentrating on command and position instead of unit statistics and abilities, WoA: Shieldwall provides simple rules that bring with them difficult decisions.

Taking the gritty tactics and concepts of the Dark Ages and setting them in the whimsical world of Agaptus, WoA: Shieldwall begins with the Roar Phase in which both sides rally their line and taunt their opponent. The goal of which is generating Froth, a resource used throughout the game to bend the rules and adjust position in the line.

To represent the flowing nature and chaos of the battlefield, WoA: Shieldwall utilizes a blind random activation system in which the commander never quite knows how far he can push his fighters before the momentum of the battle passes to his opponent.

Once two lines have met, the fighting begins. Unlike most ranked unit games, casualties are removed from the point of contact and the lines begin to merge. Each slain opponent brings with him a decision – advance and break their line, or hold and preserve your Shieldwall!