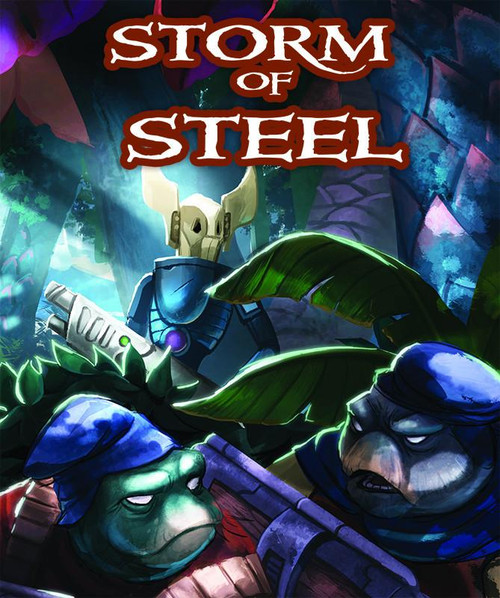 Escaping from the slaughter or their home system, a lone ship of To’ok was chased to the far reaches of the galaxy. Both the pursed To’ok, and their Ute’Wehi pursuers, crashed on the only habitable planet in the system. Separated by a near impassable mountain range, the two enemies regrouped and attempted to rebuild their civilizations.

Adding new rules for ranged weapons to the award-winning Shieldbash system, this quick play guide brings you the next step in the evolution of our rules, in a new, unique setting. This smaller, inexpensive booklet allows the player to join this battle at a lower cost of entry, and help shape the future of Zombiesmith games. Join us on our forums, http://www.quarinvasion.com/forum/ to offer feedback, suggestions, and your input on what is sure to be your next favorite rules set.

Storm of Steel is usually played in Skirmishes depicting a particular encounter. These encounters may be isolated or part of a Tale, a linked series of encounters where characters and conditions carry over from one fight to the next. Designed to represent smaller battles, Storm of Steel can be played on a battlefield as small as 2’x2’.

Defined by a few, simple attributes and abilities, each trooper is uniquely suited to his role on the battlefield, without bogging down the commander with unnecessary complication.

During a Round of battle each commander will take turns as the active commander. His opponent will draw an Action Card for him on his turn, allowing him to assign Actions to his troopers. These Actions allow the troopers to perform actions, which include moving about the battlefield, attacking enemy fighters, or other tasks performed in pursuit of victory.

In addition, each commander has access to the resource Grit. This allows a commander to perform extra movement, modify a die roll, or execute other minor actions that enable him to bend the rules to his favor. However, the active commander’s opponent must agree upon the expenditure of Grit, creating a dynamic of haggling and compromise.