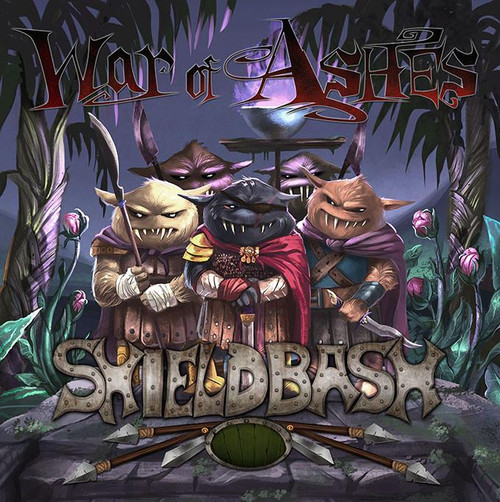 Returning to the award-winning universe of Agaptus, War of Ashes: Shieldbash continues the tale of a dying world, and its inhabitant's struggle for survival. Where WOA: Shieldwall focused on the clash of armies, Shieldbash narrows its vision towards the small-scale conflicts surrounding the larger battles.

Shieldbash is usually played in Skirmishes depicting a particular encounter. These encounters may be isolated or part of a Tale, a linked series of encounters where characters and conditions carry over from one fight to the next.

Designed to represent these smaller battles, Shieldbash can be played on a battlefield as small as 2’x2’, or across the decks of enemy ships at sea.

These desperate actions will be contested by the fighters of Agaptus. A fighter is usually a single warrior on a 20mm base, but it can also be a beast or group of lesser warriors. Defined by a few, simple attributes and abilities, each fighter is uniquely suited to his role on the battlefield, without bogging down the commander with unnecessary complication.

During a Round of battle each commander will take turns as the active commander. His opponent will draw a Stone for him on his turn, allowing him to assign Surges to his fighters. These Surges allow the fighters to perform actions, which include moving about the battlefield, attacking enemy fighters, or other tasks performed in pursuit of victory.

In addition, each commander has access to the resource Froth. Froth allows a commander to perform extra movement, modify a die roll, or execute other minor actions that enable him to bend the rules to his favor. However, the active commander’s opponent must agree upon the expenditure of Froth, creating a dynamic of haggling and compromise.

Shieldbash includes rules for all of the figures from War of Ashes: Shieldwall as well as adding ranged troops, cavalry and two new factions: The True Atronians and the Ki-kak! We could go on and on explaining it, but how about we just give you the entire rules chapter for free?