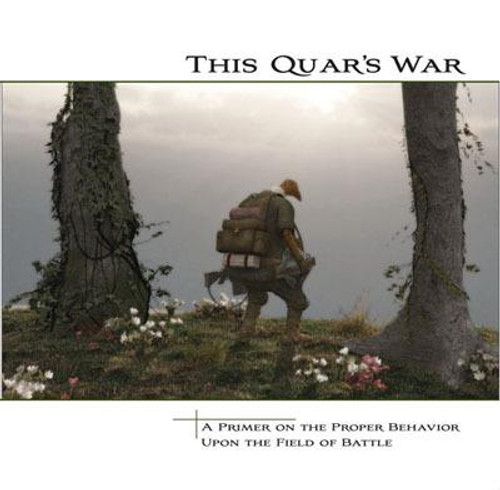 A primer on the proper behavior upon the field of battle, This Quar’s War allows players to recreate the valiant deeds of their ancestors. With chapters detailing both factions present at the infamous Battle for Gate 18, players can reference color uniform and heraldry plates to ensure the accuracy of their miniatures, as well as learn about the weapons their clan carried to war.
Designed for casual play, This Quar’s War offers straightforward yet challenging rules for the veteran miniatures player. Utilizing an open orders system and double blind activation, the rules require both a strategic vision and the ability to improvise. Combat resolution takes the form of large dice pools, offering the chaos of war as well as a simple mechanic to seamlessly blend gameplay with the abstraction of combat.
Scenario-based force creation and historical organization charts eliminate the need for army lists and point values, which allows players to use what miniatures they own for missions of their creating. Seven historically accurate missions from the Battle for Gate 18 give players a place to start as well as a chance to see how history may have unfolded differently. Will the unstoppable Crusade take Gate 18, or will the bold Coftyrans hold their ancestral home? Find out as you fight This Quar’s War!