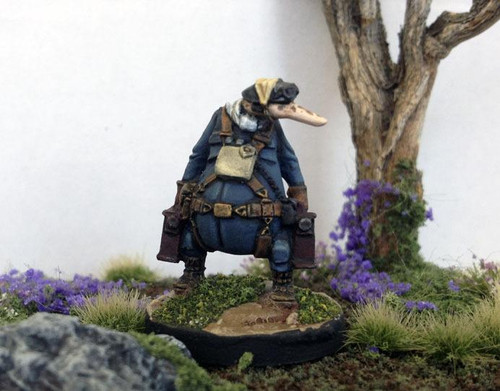 
For decades before the current crisis, the Coftyran focus remained fixed on her holy triumvirate of force, navy, infantry and airpower. While the RCFS, Navy and Crymuster received the majority of funding and research money, the Mechanical Corps were forced to subsist on the scraps left by the other branches of service. With the ascendancy of Alykinder and the reformation of warfare on the face of Alwyd, Coftyr found herself in a very delicate position. Her state-of-the-art Navy was penned in by the amassed power of the Crusader armada. The Crymuster was bled dry by expeditions to Toulmore and Maer Braech, Creevin and Western Arnyara, long before the first Crusader even appeared in the shadow of the Great Wall. Endless reliance on the Royal Coftyran Flying Service wore that proud – and effective – power down to a shadow of its former self. Only the long under-appreciated and under-funded Mechanical Corps remained mostly intact and ready to defend the First Family.
Stuck using specialized designs unsuited for cross-country movement, much less combat, or with equipment older than most servicequar’s parents, the Mechanical Corps still rose to the occasion. Even while the Navy was blockaded, it did serve to protect Coftyr from naval assaults and beach landings, compelling the Crusade to breech the Wall instead of going around. Here the CMC, with much aerocraft support, held the initial Crusader advances against the Wall at bay long enough for Crymuster units to be pulled back from foreign deployment and refitted, or replaced entirely with newly raised catrawds. Suddenly the tractorquar found themselves in the national spotlight, and their performance was nothing short of remarkable. For six long months they stopped the Crusade, plugging gaps blown in the Wall or racing to each new battlefield, until Cythwyn arrived and forced a halt to fighting for a month. When the storms cleared, Coftyr was in a much stronger position, and while the Wall would eventually succumb to the unstoppable strength of the Crusade, the delay forced by the CMC gave the Royalists time enough to build a deeper defense and preserve her freedom.