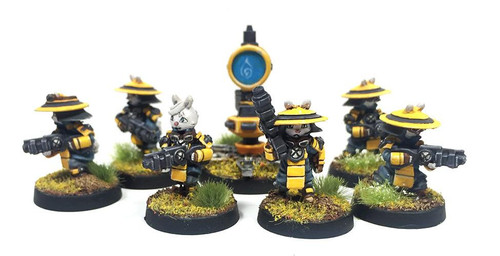 “I have a gluten allergy!”

The Tsukan Empiriat has a long history of mass militarization thanks to its ever over abundant population. Though they suffered a drastic population loss during the Calamity War, the Stormguard ranks have always met the needs of their people. A figurative name at first, the Stormguard have become a more literal embodiment of the sky’s wrath thanks to their Nimbus Rifles. The weapon’s internal chambers manipulate water into direct able storm clouds that burst out electrified globs of water aether at their targets. Stormguard descend from the heavens in battle from their airships, but can be found on foot patrols in every Tsukan city and village, keeping their prodigious families safe.