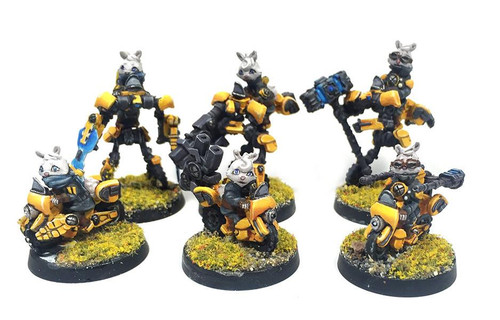 Each pack contains two figures: Owslan on bike and Owslan on transformed bike.

“If I don’t deliver in 30 minutes or less I’m not getting tipped!”

With the ever expanding growth of the Empiriat, the need to scout out new locations to settle and build cities has lead to drastic increases in the Ranger Corps, especially among Outriders.  Primarily recruited from the more patriotic and fiery tempered delivery boys and girls, who already know their way around heavily wooded and dangerous areas between cities, as well as possessing that keen intuition to find new and better routs, the Ranger Outriders feature rather individual unit members.  Most customize their mechs with unique weapons that fit their personality, making for rather unorganized groups.  The rising star and propaganda around Hina Oslen has started to increase interest in the Outriders, and many who make it into this group find it a great way to show off to their rather large families at home.