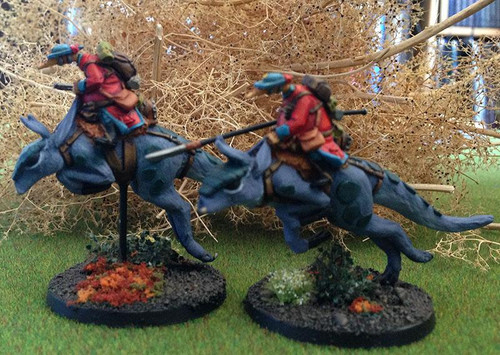 Fidwog’s Royal Myndwir Lamsaech Catrawds (mountain hopping regiments), “Mynlam” for short, are steeped in history and military tradition having been a part of the Fraedarl institution for much of its time, having given up the cadier as a mount of choice for its military since the seating of the Second King.

Being small of stature and light enough to ride the elusive gwylon that are native only to the Y Bren Cyf, fidwoggers have bred and trained the creatures within their natural environment; for the rookeries of the gwylon are perched in the highest crags of the mountains situated miles above Fy and along the spine of Y Bren Cyf; typically a short bound from local towns, villages and military posts for a gwylon wedge.

Integration of modern warfare doctrine has addressed some of the older, but still viable cavalry tactics within the FRMLC. Gywlon wedge charges have always been ferocious but now both the hushed night assaults on Crusader tractor corps along with the terrifying satchel fydous have made the Mynlam famous throughout the region.

Of note- the gwylon themselves are an omnivorous animal consuming a variety of lichens, mosses, and flowers along with various moths that populate the mountain. Riders and mounts have been known to share a sticky moth paste stew, known simply as gwyf, when stationed in forward areas for a long stretch of time or when supplies are low.
Often as a reward for its dutiful service in the field, a delicacy by gwylon standards, limestone from the caves beneath Y Bren Cyf is purchased by a good rider, who will gladly pay a glaeferin handsomely to bring back an excellent specimen for his mount.