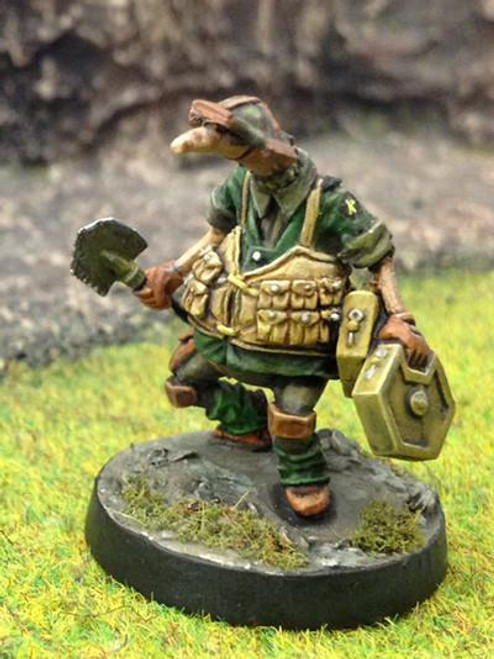 Captured here by the renowned lens of Cadro myr Byllwagg during the Breakthrough at H'nddae, Rrlohsyd Pryff Cllodwyr gyr Llrdwyg leads his section in the vanguard of the assault on the Great Wall. The Maer Braechi NCO carries the ubiquitous multi-functional entrenching tool of the rrlohsydyr and Model 4.78 Mk1 Anti-tractor mine, in itself a powerful and multi-purpose tool of the Crusade. Working in teams of two, gyr Llrdwyg coordinated the sappers in his section in clearing the blasted rubble of the first Breach using ATr mines, lunchpail grenades and a repurposed cache of Coftyran Bangallyre torpedoes. The motley crew of Craesilians, Maer Braechi and Toulmorese rrlohsydyr cleared a path wide enough for a wedge of Ailtheans, all the while under blistering fire from the remaining Coftyran defenders. Llrdwyg's section suffered appalling casualties in the action, but their dogged persistence in following their catrawd's motto - Clir'yr ffyrd - "Clearing the Way" - earned them all the Assault Cluster and the Order of Merit, 2nd Class.

While the sapper has been a common sight on battlefields across Alwyd for centuries, previous incarnations of this combat specialist were always culled from the same catrawd and lumped in among the other rhyflers. As part of Alykinder's sweeping changes to warfare on Alwyd, the Crusader approach was markedly different. A Crusader sapper catrawd is a wholly separate entity from most front-line units. A few Guards Catrawds may train and equip their own assault pioneers, but the bulk of sappers used by the Crusade are quar from one of approximately two dozen "Rrlohsydyr Catrawds". Unlike most units, these are not raised from single towns, cities or regions of one nation - a Rrlohsydyr Catrawd is filled using volunteers and conscripts from across the Continent, and are among the first truly universal Crusader organizations.

Individual platoons or sometimes entire companies may be assigned to a particular front or operation for use by local GHQ. Crusader sappers are not combat engineers - very little of their job involves fixing things. They may occasionally improve or repair trenchworks or obstacles constructed by the quar already stationed at a particular location, but their chief responsibility is the clearing of paths through enemy obstructions as quickly as possible, and usually under heavy enemy fire. The sappers of old carried all manner of tools, including axes, saws, and picks, but the Crusader rrlohsyd instead relies on explosives to do most of his work; machineguns, trench mortars and wireless-coordinated artillery do not afford them the time to work that their predecessors enjoyed. The heavy leather apron and helmets affixed with mail aventails - the source of many an off-color story about the 'bearded sapper' - have likewise been replaced by a regulation helmet and a harness of many pockets for holding fuzes and cord and cutting tools of every description. One thing about the sappers has not changed, however - the local dynas enraptured by his bravery still clamor to help spend his coin in taverns and towns on every front.