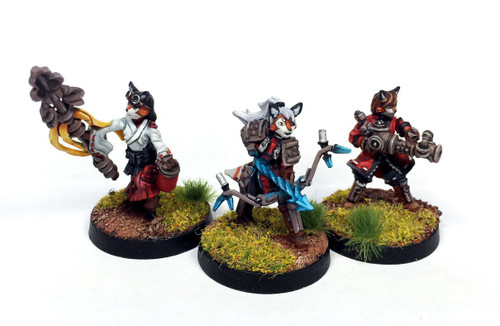 “Want to play fetch with my cuties? Oh...be careful with your hands, don’t get burned!”

Coral’s devotion to the Priesthood has earned her a second tail, a gift from the gods themselves. Daily devotion and ritual can bring many rewards, and when studying the mysteries of Spirit Beasts at the temple in Featherfall, those rewards can be adorable fire spirit friends! The Ember Sprites come to Coral rather naturally, in fact surprisingly quickly compared to other Heikei Priests. Coral’s mentor always says they’re attracted to her bright and glowing spirit, but her brother Titian always feels she looks colder when they’re around.

Far less studious and behaved as his sister Coral, Titian is somehow still a tolerated member of the High Temple of Moera. His daring and skill as a member of Temple Cannoneers earned him a staggering reputation with his fellow troops. When he was blessed with his second tail, he thought promotion might be in order, to a position of command, but due to his recklessness the High Temple chose to separate him somewhat from the order so they could direct him more independently. On the battlefield, Titian blasts away with abandon, but at least fortunately for his allies, his heavily modified spirit cannon can blast out auras of positive energy, enlivening and strengthening them. On the flip side, enemy warriors find themselves drained when hit by his attacks, assuming the blasts don’t send them flying off to their homes running.

“I think I should stand like this, it looks more dignified, right?”

Hearth’s a bit odd for a member of the Kaido military order. Most Kaido are extremely tightly knit forming familial relationships tighter than those of their own blood, even more so when a unit is comprised of actual family members. Yet, Hearth wanders Moera territory alone, providing for himself off the land and through odd jobs for the various eccentric personalities he meets. Stranger still is Hearth’s position in society, almost no three tails live or work outside of the High Temple hierarchy, further less operate outside of positions of high authority. Oddities or not, Hearth is not a fox one wants to see across the field, strikes from his arrows composed of pure aether will disable most opponents, and slow down the rest as they smolder and burn all over, engulfed in magical fires.