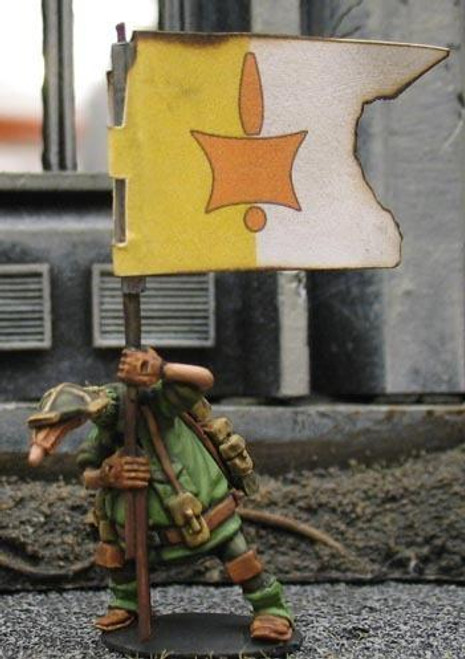 Entire battles can sometimes be won or lost on the actions of a single quar. The 293rd was part of the general advance along the Meddwyg River valley when they ran headlong into a counterattack by the elite 1st Parnol Guards. With their command in confusion, the 293rd faltered then broke. Several attempts to stand fast were begun by brave is-Caertens and Caertens who knew that the only hope for survival was to stop the rout. One rally point was on a hilltop, where the Syrnol of the 293rd ordered his men to fly the Catrawd’s flag. Unfortunately this encouraging sign was also seen by Parnolese artillery spotters, and a devastating barrage killed most of the senior officers and the braver soldiers.

Even before the last rounds fell, Rhyfler Siloh climbed the carnage-strewn hill, and picked up the 293rd’s standard. Finding its flagpole completely shattered, he made a new one with strands of wire and debris he picked up from the ground. As the smoke from the barrage lifted and the dust settled, there stood Rhyfler Siloh, facing the Parnol Guard and waving his flag. There was a moment of silence across the battlefield, as the Parnolese and Alskrechers stared in amazement at the defiant Rhyfler.

Though he and five other standard-bearers died as the 293rd rallied and held off the 1st Parnol Guard, the bravery of Rhyfler Siloh earned him a posthumous Iron Laurel, and lives on as an example to the soldiers of Alskrech. This figure’s pose is taken from Rhyfler Siloh’s statue in Alskrech’s Memorial Park.