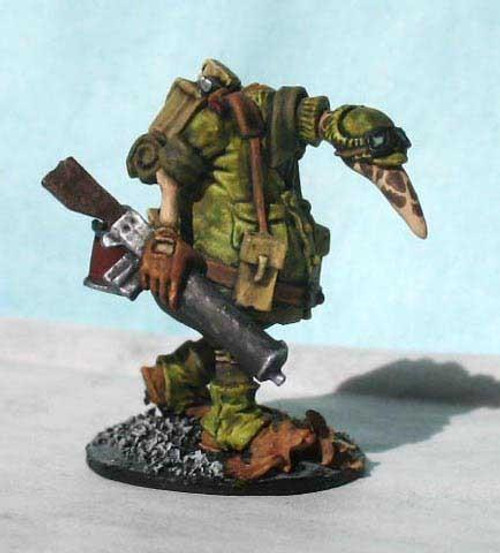 28mm scale (22mm to the shoulder.)
Separate arms, head and backpack as well as an extra grenade and pack.
(Colors by paint monkey and irate squirrel) Sculpted by: Aaron Brown

Rhyfler Maerch, 42nd Catrawd (“Alykinder’s Daggers”). Maerch had been a Rhyfler in the light infantry for close to 18 months at the time of this sculpt. He was later killed along with most of the 42nd at the Battle of Shayl’s Crossing during the Halfshin Offensive. Ryf. Maerch is pictured here in standard light infantry fatigues and equipped with a Bogen 12-mm semi-automatic rifle and type 2 “twist and throw” grenade, all standard issue for the period. Note that Ryf. Maerch is wearing a more common combat boot instead of the trench boot recorded as standard, a result of shortages on the Eastern Front.