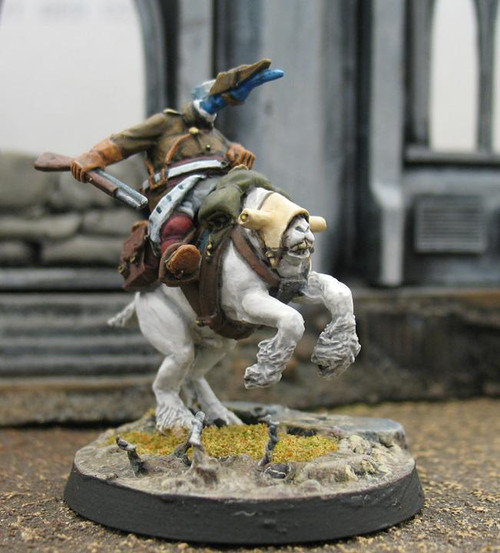 The Pawul clan have been cavalry soldiers for over a century, and Syrnol Pawul Nahr is the latest member of the clan to ride to war. A twenty-year veteran of the Tokish and Crusader armies, Nahr is a natural leader, able to balance the traditionalism of the cavalry branch with the innovation of the Crusader Army. Where other cavalry officers may be inclined to grumble about how things were better in the old days, Nahr is more inclined to experiment with new weapons and technologies to give his cavalry their edge.

Nahr is depicted here with his faithful mount Stalker. Stalker is a Tokish Rouncy, a breed well-loved for its agility, stable footing, and hardiness, which are valuable features in a military mount. However, many Tokish Rouncies have a contrary streak to their personality, and Stalker is no exception. While Stalker has warned Nahr of more than one ambush, and carried him in and out of battle, there is nothing the cadier likes better than to eat the epaulets off his master’s best uniform.