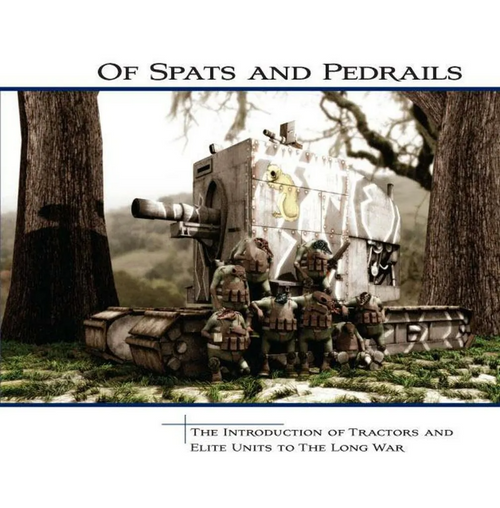 SOURCEBOOK FOR SONGS OF OUR ANCESTORS AND TQW 1.0!!!

A Rhyfler is only as Good as His Boots

It is early winter, 1772. Alwyd is still gripped by the fierce struggle between Alykinder’s Crusaders and the last Royalist holdouts. Factories produce aerocraft and tractors by the score daily, yet the ravenous appetite of The Long War refuses to be sated. There are dark clouds gathering as brave quar in the conquered lands begin to resist the stranglehold of the Crusade more openly. Will the Iron Regime weather the coming storm or will the winds of change sweep across Alwyd yet again?

An expansion for both Songs of Our Ancestors and This Quar’s War, this book provides rules for fighting both large and small actions between the might of Alykinder’s Crusade, the strength of the Coftyran Crymuster, and the elusive Partisans throughout the continent.

Introducing rules for the fighting vehicles of Alwyd for both systems, Commanders can now bring the full weight of an armoured assault against their opponent. Expanding on the Baeliog rules from TQW now allows players to field squadrons of lighter tractors and even design their own. For SOA the addition of vehicles adds the tactical challenge of tractor crews that activate as one unit.
This book also includes rules for the tenacious Royalists of Fidwog and the rebellious forces of Kryst. New profiles for SOA for both factions allow the addition of specialist units and characters. Rules for elite units in TQW give new options to commanders representing the best rhyflers of Alwyd.
With new missions and more historical background, Of Spats and Pedrails is an invaluable resource for Commanders pursuing victory in The Long War.

Tales of the Breach - Print

Tales of the Breach - Print