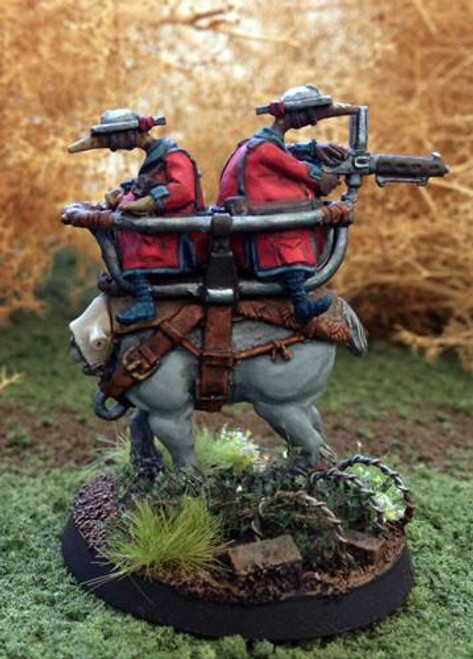 Foyt stroked Mable's brow as she lay wounded on the cold, wet turf. The cadier had performed admirably in the push, and when she had taken a round had gone down without so much as a grunt, allowing Foyt and Dafyd to use her as a shield while they brought their machinegun to bear on the enemy. The push had been a success, thanks in part to the grazing fire laid down by the pair, and now Dafyd had run back to the rear to find a veterinarian to tend to poor Mable's wounds.

She had been with the 723 Fraedarl "Light Hearts" Company since its formation, two long years passed. The young cadier had seen countless battles while many in her stable had come and gone, but not Mable. No, she was a rare and special animal - a young, white mare from the house of Glasporfa in the eastern valley of Ballytom, renowned for their strong, intelligent stock.

Since being assigned to Foyt and Dafyd she had saved them on countless occasions, and both quar agreed this day would not be her last. She had earned more respect over the last few years than the gaefyni riding her had won medals, and they were not going to let her down.

What seemed like hours had gone by before Dafyd finally sprinted back, dragging an officer type in tow. The quar knelt down beside Mable, pulled a stethoscope from a small black bag he carried, and listened to her breathing. He looked up and shook his head. "I'm very sorry, gaefyni, but the mare hasn't much longer." He packed his bag and gave the pair a look of sorrow, then stood up and trudged back to the line.

Foyt and Dafyd looked at each other, tears welling in their eyes. They both hugged the mare and held her tightly, refusing to leave her side until Ancillary Services had cleared the no-quar’s-land. In the early evening a heavy tarp was brought out, and Mable placed upon it. She was carried back with her lads at the lead, a solemn procession fit for a queen.

Months later, a statue of Mable was erected outside the Glasporfa stables, commissioned by her two fraedarl. Foyt and Dafyd raised the funds themselves, generously gleaned from the numerous catrawds that they had supported from atop Mable’s willing back.