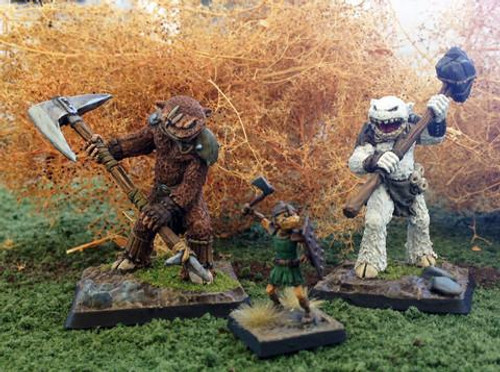 In the year 74 BCG, 43 years after the Vidaar made landfall, Vidaarus the Eighty-fifth sent his great clan leader Nhilde Skullsmasher on a quest to go back along their ancestors trail to find the Fifty-ninth Island that Wasn’t Garigla.  His fleet of five ships was at sea for 10 years, and only four returned, but they returned with their holds full of monsters from that wretched island somewhere in the Azure Sea.

Called the Nhilde Troll, these brutes were taken by the Vidaar armies to special camps deep in the mountains of Matriga to be bred, trained, and armored for war.   They were first put to use in the Battle for Naragos Pass in 57 BGC, and they proved to be decisive in turning the battle in the Vidaar’s favor.  The towering beasts could smash their way through even the most stalwart Elvorix shieldwalls, and their sheer size caused many hardened warriors to flee in panic.  Only concerted efforts to surround and hack down the monsters from all sides proved effective, but even so, many bucks were hewn asunder and trodden underfoot before a single Nhilde could be subdued.

The Trolls themselves seem even less intelligent than their masters, if such a thing is possible.  They do respond generally to orders given, and the long lash scars on their backs indicate a harsh kind of training to condition them to obedience.