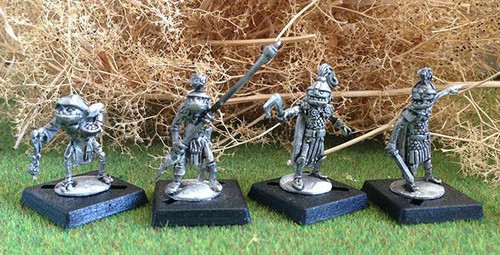 Dowodik and War Staff
Among the Styrsik, few words arouse as much fear and loathing as the title 'dowodik'. To be chosen by the King to run an entire army, surrounded by cripples and whitebellies unfit for anything but lugging rags to and fro and tooting on their horns... it's enough to curdle a proud buck's blood, and best not to even mention all the paperwork. Any Vidaar worth his salt would rather stay in the shieldwall or atop the fo'c'sle, where he can best direct his wrath against the usurpers and encroachers, and let some other lackey do the bidding of the King.

Uldvlag
Three hundred years trapped belowdecks with naught but ylarks and trolls can have a strange effect on folks. Case in point, the Vidaar priests. Somewhere along the way, they became convinced that the cheeses made from the milk of the sacred ylarks were trying to talk to them. Not only did they build an entire religion based around Tyromancy, they also effectively weaponized it. Wielding curdled blocks of cheese and moldy buckets of whey and other dairy disasters so vile even the Kuld won't eat them, the fearsome - if scantily clad - devotees of Akka-maas sow discord and disarray among their foes, and make quite a mess of things in the meanwhile.