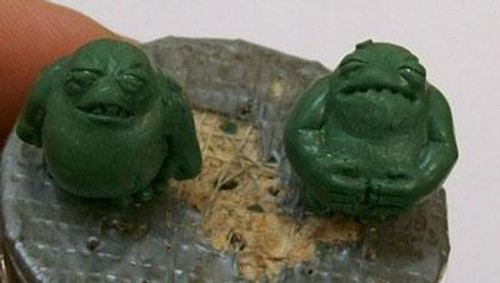 As if the prospect of being devoured alive weren't bad enough, the vile whelps of the underworld possess a singular talent, foreign to every other race on Agaptus. While everyone else has to be content with getting right on top of the foe to hurt them, certain Kuld have the ability to hit targets from a distance with a most gruesome and disgusting of attacks. All Kuld are possessed of an iron gullet and formidible digestive powers, but among them, a certain few called Shuda can project the contents of their stomachs at a very respectable range. The Shuda are only able to perform this noxious assault after gorging to the point of near-death on whatever happens to be lying around. In short, they throw up on you. Throw up dead things. And when they do, it hurts, and let's not even mention the stink. Not only that, but when a Shuda is killed, the strange elements of their constitution cause their bodies to bloat immediately and rupture, often explosively, shortly thereafter.