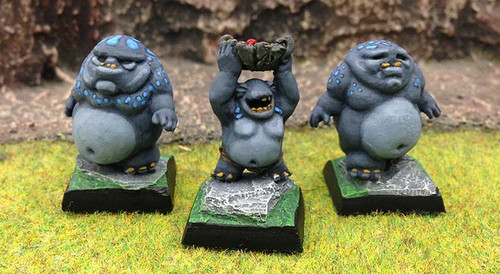 Few of the spectacles to be seen on an Agaptan battlefield - and there are plenty, to be sure - are quite so puzzling as the Augurst. Essentially a fat blue Kuld dragging a giant bowl along behind him, the Augurst is something of a jack-of-all-trades to the Kuld. His duties - mostly vomiting into said bowl then carrying it around - though seemingly simple, are in fact quite complex. So pungent are the scents of his regurgitations, they exhort the Kuld already on the battlefield to great feats of hunger and engorgement, and at the same time draw ever more of the creatures from the surrounding countryside. The most talented of these erstwhile priest-cum-standard bearers can even mix and match the exact nature of his emissions with special oils produced in glands in his throat to pass specific instructions to other Kuld. Without exception, the Augurst is the oldest Kuld in the warband, but neither age nor lingering wounds seem to affect them as other Agaptan creatures are. Indeed, the older the Kuld, the more prolific, and more specialized, his scent-mastery, rendering him invaluable on the field of war.