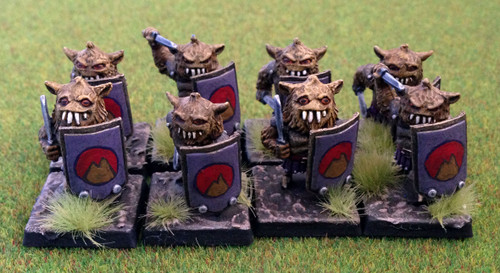 The youngest and most numerous of the feared Jaarl host, the Roccio is a brick of fierce sea-folk trained to the sword and shield since infancy. Of all the Agaptans fighting over Sentia, the Jaarl are the most organized, the most overtly militaristic. The Vidaar - the broke-backs, as the sons of Murmadon call them - may think themselves a strong army, and they are beyond doubt more numerous, but beside the Jaarl they are little more than a spirited rabble.
Every Jaarl fawn aspires to earn his father's swords, prized remnants of their former home, their former glory. No sword has been forged since their flight from the ancient cities on the slopes of Murmadon; every one remaining is a link to the past, and a grim reminder of what they fight to create on the Sentian lands. A warrior would as soon part with his limbs as lose his family's greatest possession, and many have.
As soon as he is able to hold a wooden sword upright, a Jaarl is conditioned to unquestioning discipline, unswerving loyalty to his family and fellow warriors. Lost are the old names, the old titles, from the days before the calamity that drove them from the volcano. The new emphasis has become that all Jaarl are kith and kin, striving endlessly to build a new home. It can never be Murmadon - that dream is shattered, melted beneath the lava sea - but it can still be home.